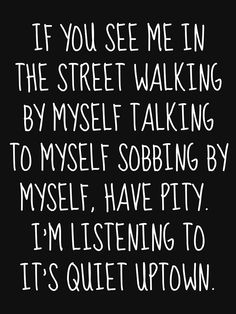 This incredible song speaks volumes about two characters who are in different ways shocked speechless by the loss of their son.

Angelica provides key narration of events while Eliza stands silently on stage throughout the song until almost before it ends. Then she repeats Alexander’s line “It’s quiet uptown,” signaling the start of her forgiveness of him. And there’s so very much he needs forgiveness for, including his infidelity, the public shaming her put her through with the Reynold’s Pamphlet, his bottomless and ambition, workaholism, and — oh I don’t know — the fact that he kind of got their son killed with his bad advice. (Parenting tip, when your son asks how to fight a duel, the only correct answer is “Don’t.” In fact, that was advice Alexander Hamilton himself received earlier in the musical from George Washington, a father figure to him.)

Hamilton has plenty to say in the song, but is  speechless in the sense that he is  mostly borrowing lines and melodies from other characters. Familiar lines include Burr’s line from “Dear Theodosia” to his daughter,”You knock me out I fall apart” and also include many of Eliza’s lines from “That Would Be Enough”. (As is often the credit, thanks to the contributors over at Genius for this insight.) The cocky young man who showed off to friends by changing the rhyming structure of their song halfway through  in “My Shot” and the man facing potential ruin but still confident he could “Write My Way Out” now has to rely on others’ words to express the appreciation he’s gained for his wife and family life. But he seems to finally get they can be enough, for this song at least.

Grab a Costco-sized double box of tissues and listen.

View all posts by stevelip